Mr Stevens, our customer approached us with a requirement for a wall-attached carport to go between his and his neighbour’s house in Tonbridge. Mr Stevens wanted to keep his Land Rover undercover, sheltered and protected from the elements all year round.

The main detail and criteria on our site visit were to avoid his soil pipe, the rainwater down-pipe also the back door and windows. We also needed to get the details of his neighbours rainwater pipe, which he had gained permission to use for the canopy guttering. 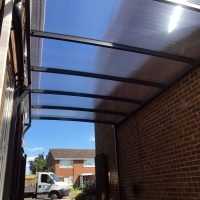 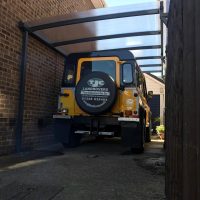 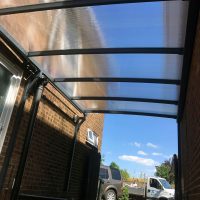 The first draft drawings were created and Mr Stevens gave valuable feedback and was able to confirm all of our measurements. We slightly adjusted the canopy location which Mr Stevens requested and his input in ensuring all measurements would still be accurate was critical.

Mr Stevens signed the final drawings off and chose the contemporary Anthracite Grey (RAL 7016), which would complement the area. Mr Stevens chose Clear polycarbonate for the roof glazing, as he had windows and his back door under the canopy and still wanted to ensure the maximum light transmission.

Once a manufactured/delivered date had been confirmed, the installation team arranged a suitable date for the canopy to be delivered and erected.

Installation of the canopy was straightforward and we adapted Mr Steven’s neighbours down-pipe so that we could branch the canopy down-pipe into the existing drainage system.

Just a short note to say how pleased I am with the carport. The quality is tremendous & it is clearly a product that is built to last.

As I explained when I first met Tim I have been looking to get a carport installed for several years. In most instances, the response when I made enquiries of other suppliers (even if they were minded to reply at all) was that the soil pipe on the wall of the house & the layout of the surface water & sewage runs under the drive placed my enquiry in the “too difficult” category. Swan neck brackets were never raised as a possible solution & one chap spent an hour with me & then even failed to send an e-mail saying that they would not quote.
Mr Stevens

Kappion delivers a world class premium product. Manufacturing from a state of the art, 20,000 square foot facility in the Midlands, along with our carefully chosen and experienced suppliers across two sites in Europe. Between us we have amassed years of canopy manufacturing experience. Here are some of our combined statistics: